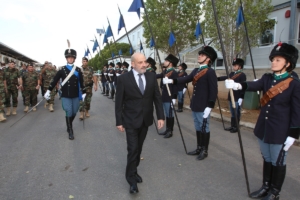 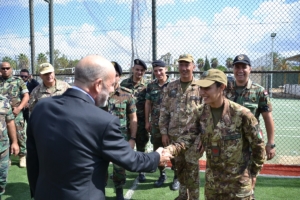 In a press release by UNIFIL, it said: “UNIFIL Head of Mission and Force Commander Major General Michael Beary today met separately with the Speaker of Parliament, Nabih Berri, and Prime Minister Saad Hariri in Beirut”. Release added: “In both meetings, the UNIFIL head thanked the Lebanese leaders for their continued support to UNIFIL in the fulfillment of its mandate in accordance with the UN Security Council resolution 1701 (2006), while noting that Lebanon’s continued commitment to the UN resolution is critical”. Major General Beary briefed the leaders on the situation in the UNIFIL area of operations (AO) and along the Blue Line, further stating that the situation remains calm and stable. He said that UNIFIL has, over the past months, increased its outreach to the local population as well as intensified engagement with local leaders and communities in the Mission’s ongoing efforts to preserve the calm environment and stability.

Italian Minister of Defense, Roberta Pinotti, on Monday winded up her state visit in Lebanon, and held a news conference at the VIP Hall at Beirut international airport, whereby she tackled the outcome of her meetings with the top Lebanese officials. In response to a question on Italy’s concern over a likely escalation between Hezbollah and Israel, Pinotti said highlighted the importance of the UNIFIL “in order to prevent the recurrence of similar escalation between the Lebanese and the Israelis”. Regarding the Syrians’ displacement to Lebanon, Pinotti maintained that “the international community must recognize the efforts undertaken by the Lebanese government in that respect, especially that Lebanon has hosted great numbers of displaced Syrians, in addition to the Palestinian refugees who are already present in Lebanon”.

Ambassadors of 6 major countries sounded the alarm Friday over President Michel Aoun’s latest statements about Hezbollah’s arms, amid threats that the the United Nations Interim Force in Lebanon or UNIFIL could withdraw its peacekeeping mission from south Lebanon. A meeting was held on February 15 at the United Nations headquarters in Yarze. It included ambassadors of the International Support Group for Lebanon, the US, France, Britain, Germany, Italy and China in addition to the EU ambassador and Representative of the United Nations Secretary-General in Lebanon and Arab League Representative. The meeting addressed three main issues: The upcoming parliamentary elections and the new electoral law, the security situation in Lebanon including backing the Lebanese Army, the International Brussels Conference on the Syrian crisis and the Syrian refugees in Lebanon.Talks highlighted the latest statement of Aoun during an official visit to Egypt, during which they said does not abide by resolution 1701, but merely reflects visions of a single Lebanese party. The US ambassador has however, revealed a tendency to pull the UNIFIL forces from southern Lebanon if the country does not abide by international conventions.

Lebanese authorities are deeply grateful toward the peacekeepers of the UNIFIL mission. The Italian contingent, currently made up of units of the Taurinense Alpine Brigade, completed and inaugurated an important project in favor of the Lebanese Internal Security Forces (ISF), near two of their facilities in the city of Tyre, in the south of the country.

Specifically, they completed deliveries of four generators of medium and large capacity, installed in the main bases of the ISF to implement the provision of electricity of the centers of command and control of the Internal Security Forces, compensating for the lack of energy, which – in that area – is limited to few hours in daylight.

During the inauguration ceremony, held in base of the command of the 2nd mobile Regiment of ISF, local authorities have expressed appreciation for the cooperation and the proximity of the Italian contingent, dedicated to the support of the Lebanese armed forces as required by UN Resolution 1701.

Official visit of Prime Minister Matteo Renzi to the Italian contingent in Lebanon, to verify the situation on the entire area of UNIFIL operation and to compliment the work of Italian troops in the south of the country. Accompanied by General Claudio Graziano, Chief of the Defence Staff, the Prime Minister has reached the military base Millevoi in Shama, the headquarters of the West Sector of UNIFIL, currently leaded by the Alpine Brigade “Taurinense”.

Waiting for him, the Head of Mission and Force Commander of UNIFIL, Major General Luciano Portolano, and the Commander of national Contingent, Brigadier General Franco Federici. Informal and warm Christmas greetings made by Renzi, who wanted to meet men and women of our contingent informally, expressing the closeness of the Italian government to them and to their families.

Great praise for the armed forces involved in peacekeeping missions and peacekeepers of Taurinense in Lebanon, operating within the framework of UN Resolution 170 in order to monitor the cessation of hostilities, support the Lebanese Armed Forces, and ensure appropriate support for the people local. «You are highly professional soldiers, you carry out your precious work in the service of the Italian institutions and peace, far away from your loved ones. You make us proud to be Italian», concluded the Prime Minister.

New round of joint exercises for Taurinense Mountain Brigade, who is leading the command of Sector West of UNIFIL mission in Lebanon. The activities cycle, planed to maintain their training level and to implement procedures with units coming from other countries, were concluded with the final coaching day near the village of Naqoura. In this area converged Italian maneuvering units, engaged with French and Ghanaian equivalent units in the simulation of a serious accident and of the following management of tension escalation. During the training the exploring units of the Nizza Cavalry Regiment, providing the Sector Mobile Reserve (reserve unit and rapid deployment) of the western sector of the UNIFIL mission, have implemented the application of standard procedures and rapid intervention. At the same time, the Brigade Taurinense staff, was responsible for coordinating and implementing the procedures of command and control through a series of specific exercises wich involved, now, most of the employed units, both national and foreign. All this within the framework of the activities undertaken by the Alpine troops in southern Lebanon, where, since two months, they ensure the control of the territory in their area of responsibility, in close coordination with the Lebanese armed forces, through continued joint patrols and a capillary presence on the territory, using the maneuver units of Nizza Cavalry Regiment (1st) and of the Alpine Battalion L’Aquila.
Viviana Passalacqua

The activity of the Italian soldiers engaged in the UNIFIL mission continues both in terms of cooperation with the local armed forces, than of support to the population. In these last days the General Staffs of the UNIFIL Sector West, based Taurinense Alpine Brigade, met the 5th Brigade of the Lebanese Armed Forces (LAF) in the military base of Shama.

[subscriptionform]
[level-european-affairs]
An important meeting, aimed at increasing integration and joint activities between the two Chiefs by planning common trainings. At the same time, the initiatives in favour of the local population carry on: in late November, Lebanese Red Cross of Tiro has received materials for hospital and healthcare, offered by donors from Novara and delivered by the soldiers of ITALBATT, the maneuver unit of the UNIFIL Italian contingent, currently based Nizza Cavalry Regiment.

“The donation was made possible thanks to the solidarity and cooperation shown by the Hospital “Maggiore della Carità”, by the Sacred Military Constantinian Order of St. George, by the “National Alpine Association – Novara section” and by the Oleggio Red Cross, important organizations who wanted to support actively the initiatives promoted for Lebanon by Nizza Regiment, ” as Colonel Massimiliano Quarto, commander of Italbatt, declared during the ceremony. The equipment – which includes 14 inpatient beds with mattresses and fireproof pillows, 1 stair lift and 1 multipurpose chair for disabled, 5 wheelchairs, and numerous boxes of disposables from surgery – will be used by the Red Cross for the normal activities of the hospital, and for subsequent distribution at home for chronic patients followed by the voluntary organization.
Viviana Passalacqua

Italian peacekeepers based on Alpina Taurinense Brigade have completed the construction of a covered cistern for collecting rainwater in the school of Ayta Ash Sha’b, in South Lebanon, attended by disabled children.

[subscriptionform]
[level-european-affairs]
The project, carried out by the joint task force within the civil military cooperation, pursues the objectives set by Resolution 1701 for the improvement of living conditions in Lebanese villages. It has been realized thanks to the Italian funds dedicated to the development of civil and military cooperation projects.

Protagonist of the delivering, the Alpine Taurinense Brigade, maneuver unit of the Italian Army deployed in Lebanon since about a month in UNIFIL mission. For the first time, our soldiers operate in bi-national and non-permanent Italo-French conformation. The inaugural ceremony was attended by the commander of the Western Sector of UNIFIL and of Italian contingent, civil and religious authorities of the village including mayor Youssefi Srour, elders and school teachers of Ayta Ash Sha’b. All them expressed appreciation and gratitude for the work done.
Viviana Passalacqua

Sustaining population, developing socio-cultural integration and fighting poverty. The construction of a soccer field in the Jinnata Lebanese municipality, near the city Tiro city, reflects these objectives.

[subscriptionform]
[level-european-affairs]
The sport facility was completed by the Italian contingent operating in the UNIFIL Sector West, the Alpina Taurinense Brigade, and delivered to the population during a groundbreaking ceremony. The event was attended by numerous Lebanese authorities, including the “Quaemaquan” Tyre Jaffal Mohammed Ali, the president of Tiro municipality, Abed Al Mohsen al Houssayini and the mayor of the municipality.

Supervised by specialists of the Multinational CIMIC Group, the project was carried out thanks to the Italian funds allocated for the development of the civil and military cooperation. In accordance with the objectives established by Resolution 1701, to support and improve the living conditions of the southern Lebanon people, the Sector West commander has highlighted the importance of “confidence building”, the process of trust and transparency bulding based on mutual co-operation between all actors in south Lebanon.
Viviana Passalacqua